Finishing a project makes you feel good! I had the responsibility this year of coming up with, writing, and designing a 50 day devotional guide for the Easter season for our local church. I love doing this kind of thing! This is where my heart is. The title, The Great 50 Days, is a name given to the period of time starting Easter Sunday lasting until Pentecost Sunday (50 Days).

Well, here’s some pics of my work. 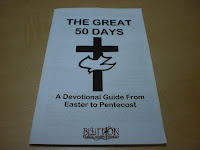 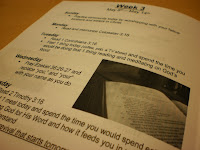 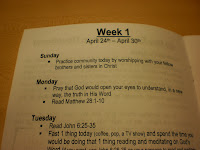 Well, today is the day the disciples and Jesus celebrated Passover. It also marks the first communion. If you follow Mark’s account (14:12-26) it seems Jesus and His disciples are celebrating an early Passover. Scholars tell us Jews would have observed Passover on Friday. Ben Witherington III suggests the idea of the disciples and Jesus sneaking into the city under the cloak of darkness to celebrate the Passover early. They would have to be somewhat quiet about things if they were doing this meal early. I was also thinking of all the commotion Jesus stirred up by entering Jerusalem and clearing the temple. The religious leaders are chomping at the bit to get at Him. So, if they are celebrating an early Passover they probably don’t want to draw a lot of attention to themselves.

It seems Jesus has set up a place, a “guest room,” (TNIV) to celebrate the Passover with His disciples. To me it seems obvious He has made some pre-arrangements for it (14:13-15). If they are trying to be sneaky about this whole thing, because they are doing it a day early, then the signal Jesus gives to the disciples; “A man carrying a jar of water will meet you. Follow him.” makes a bit more sense. This is going to be a very special meal. Passover is a meal about freedom. It was the last meal the Israelites ate before leaving Egypt. It meant God had acted on their behalf and was rescuing them from bondage in Egypt. Their God was showing that He alone is the only true God.

While eating Jesus predicts He’s going to be betrayed by one of the disciples (14:17). Jesus had spent 3 years of His life with Judas and I’m sure He was on to his crooked ways. What’s surprising is that none of the other disciples know its Judas. Their response in verse 19, “Surely not I?” indicates they are more worried about it being themselves than someone else. Judas fooled the disciples but not Jesus.


Some questions I was thinking about with this passage:

- I wonder what the disciples were thinking as they listened to their teacher talk about what each of the elements meant?

- Did they really understand that Jesus was going to die and give up His life?

- Did they think He would die a heroic death by the sword?

- What were they thinking?

- What do you think they were thinking?
Posted by Tim Sheets at 8:59 AM No comments:

Thought I would share something near and dear to me with you today. For Lent this year I've been using the prayers offered in 3 Simple Rules by Rueben P. Job. At the end of the book they have morning prayers, afternoon prayers, and evening prayers. This has been a great guide for me in prayer. I have found that I need and benefit in my prayer time from structure. The book itslef is a great little book by the way too! A very easy read. This morning I want to share the prayer of invitation from the morning prayers. I encourage you to make it your prayer today. Prayer of Invitation Loving Teacher, come and make your home in our hearts this day. Dwell within us all day long and save us from error or foolish ways. Teach us today to do no harm, to do good, and assist us so that we may stay in loving relationship with You and our neighbor. Help us today to be an answer to another's prayer so that we may be one of Your signs of hope in the world You love. What a great prayer! I've been trying to pray it every morning and really like the part about God saving us from error or foolish ways. I need that! If you think you would benefit from a structured prayer guide this book offers some wonderful guidance.
Posted by Tim Sheets at 9:42 AM 2 comments:

Problems
There’s a fog that has descended on our small town this morning. It seems this fog might be a good metaphor for the book I just read called Love Wins by Rob Bell. What’s normally seen clearly by many has been enveloped in a fog. There’s uncertainty all around. The big idea of this book is that God may actually give individuals who reject Him on earth a chance in hell to choose Him. God loves us and wants all people to love Him and this book explores the idea or speculation that God may extend His love to those in hell so that in the end love can win.

One of the problems with this book is that its theory of love winning is based on theological speculation about certain passages in God’s word. One thing to keep in mind is that Rob believes in a hell and never really says he holds to the position he presents in this book, but he still presents it and tries really hard to back it up with scripture and reason.

I thought some of the exegesis done in this book was weak and left much to be desired. It seems Rob breaks down a Greek word that is not the correct Greek word in Matthew 25:46. He says this word can mean a period of time or a time of pruning, but the definitions given for the specific adjective used by Matthew clearly carries with it the idea of something that goes on forever or from everlasting to everlasting. This is how every translation translates this word. So, the question is did the many translators translate it wrong or did Rob translate it wrong? There is no direct evidence in scripture to support the idea of those who didn’t believe in Jesus while on earth getting a second chance in the afterlife or hell. Actually, the evidence seems to point in quite the opposite direction. 2 Peter 3:9 actually says God is patient with us so none will perish. Perish? Perish from what? This doesn’t mean none will perish, but that some will perish and God is doing everything possible to prevent that and He is “not wanting” (the word used in the NRSV) and hoping none will perish. What does that mean? Does it mean some will perish? God couldn’t say that if people didn’t really perish could He?

I have several good friends I meet with on occasion and we dream, speculate would be a better word, about certain things in God’s word and what’s to come. It’s fun and makes for great conversation. We ask things like; did angels really have sex with humans and create a superhuman race (see Gen 6)? Will God allow us to rule over planets in the life to come? How will we travel back and forth from those planets? Could Jesus have gone and died for life on other planets? Will we talk to animals in the New Jerusalem? These are things we talk and wonder about amongst ourselves. While it may make for interesting conversation, it’s not something we go out teaching to others. It’s just theory and guessing. What could we base it upon?

I feel as a pastor I have to be careful not to teach speculation, but truth. I felt as if Rob was trying to teach something based upon speculation. While the idea of everyone eventually coming to Christ is appealing, you just can’t find much scriptural evidence to back up such a thing. You get one life to live and amidst that one life you have to make a decision: will you follow Jesus or reject Him? There's no fog about it.

Any thoughts from those of you who have read the book?
Posted by Tim Sheets at 9:30 AM 1 comment: