If God is Good book

This will be short and sweet because I’m in class this week and limited on time.

If God is sovereign and good we have nothing to worry about it, right? Randy Alcorn’s latest book If God is Good examines suffering from a Reformed Christian perspective. There are a lot of good things about this book and it may help many of you who struggle with the question of evil and suffering in this world.

I was reading Paul last night in 2 Corinthians 1:5 and he confirms the fact that suffering will be in our lives. How will you respond?
Posted by Tim Sheets at 9:29 AM No comments:

Working on a profile for Malachi. First set of slides (revamped this a little): 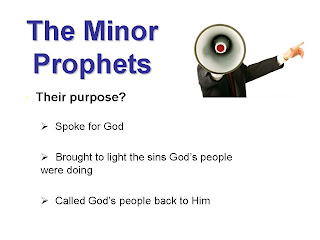 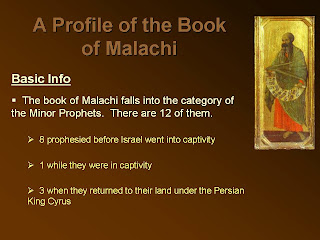 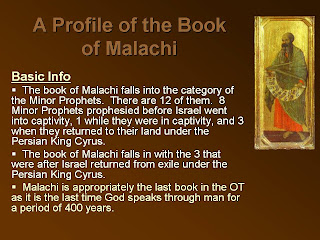 Prophets had an interesting role. It seems the prophets (e.g, Isaiah, Jeremiah, Malachi) of the OT had a unique and distinct role.
Do we have prophets like that today?
Posted by Tim Sheets at 3:11 PM No comments:

Labels: The Book of Malachi

I'm re-discovering the joy of getting up early. My oldest daughter has been assisting me with that in that she usually wakes up first (6:30am) and then comes and wakes up daddy to help get the Care Bears DVD started. She watches the same DVD every morning over and over! I figured this morning since I was already up, I would stay up and come in and work out in the morning instead of the evening. Early morning workouts are brutal!
Anyways, I've been studying the Minor Prophets. I started with Jonah a few months ago and have now jumped to the last of the Minor Prophets, Malachi (that's a pic 14th Century pic of him to the right). What a relevant message for us today. Here is what I have discovered so far about the author of this last book of our OT.
The Author
- Malachi means “my messenger” and some have presumed this a cover for the letter being anonymous. The majority of scholars believe the letter is from an actual man by the name of Malachi and the meaning of his name is his function. He is the Lord’s messenger and he has come to bring the Israelites a message (NRSV “an oracle”) from the LORD.
- The person Malachi seems to be a Type-A personality. To me, Malachi is the type of guy you would want on your side in a debate, but when the debate ends you would want him to go directly home because he would probably annoy you if he hung around. He’s confrontational and in your face and his character really gives the book Malachi some distinction and uniqueness from the other Minor Prophets (will discuss this more in a later post).
- Malachi was the right man at the right time because his audience was a group of people who can be described as: disillusioned (1:3), contemptuous (1:7, 2:2), callous (2:16), unfair (3:5), unconcerned (3:14-15), doubters and skeptics (3:16-18), and really immoral (4:1). It takes a Type-A personality to break through to such a group. Malachi’s in-your-face-combative-style caused ears to perk up and listen.
Any thoughts?
Posted by Tim Sheets at 8:21 AM No comments:

Labels: The Book of Malachi

This is actually 2 news stories (neither are related).

Story 1
Just got word that the popular NIV translation is going to be getting a facelift. A newly revised NIV will make an appearance in 2011. Will you be ready? Here is the info straight from Zondervan's site.

To me, it just sounds like the revised version of the NIV is going to be the TNIV in disguise. What do you think? I hope so, because I really like the TNIV and think it is one of the best translations available today.

There is an Arizona pastor that looks and even sounds like Jack Shepherd (sp?) from Lost that is preaching and praying that Barack Obama will die and go to hell. Here is the story:

I remember seeing a youtube video of this guy several years ago preaching a sermon about how real men pee standing up. I kid you not this was a whole sermon!

So, what are your thought about this all?
Posted by Tim Sheets at 5:15 PM 5 comments: